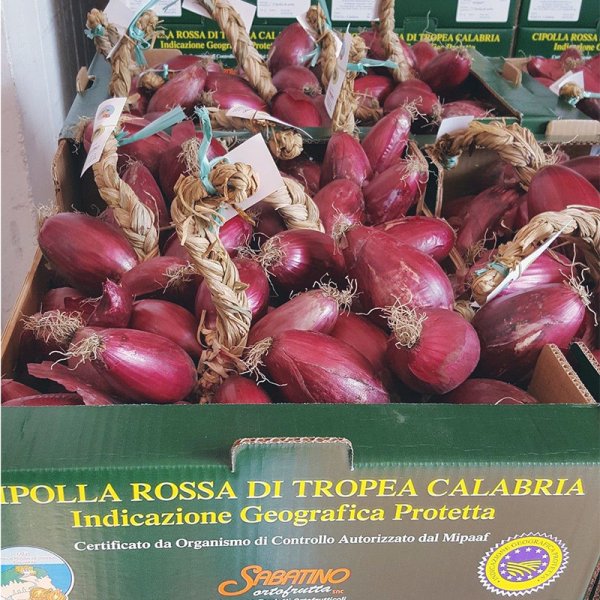 The red onion from Tropea, Italy, (Italian: "Cipolla Rossa di Tropea") is a particular variety of red onion which grows in a small area of Calabria in southern Italy named "Capo Vaticano" near the city of Tropea. This onion has a stronger and sweeter aroma and the inner part is juicier and whiter than the other red onions. It is completely possible to make a marmalade with this red onion. In March 2008, the European Union registered the Protected Designation of Origin mark for the onions produced in this particular area.

The shape of its bulbs, of a deep purple color, vary from round to oval to elongated. The onion’s extraordinary sweetness, its delicate scent, its lightness and enjoyable taste, which derive from the morphological peculiarities of the soil and microclimate where it is grown, make it a much sought after ingredient by gourmets and chefs.

As if its wonderful taste wasn’t enough, the Tropea onion has proven health benefits, known since ancient times. Recent studies have shown that the Tropea onion, because of its high quality, seem to provide better therapeutic functions than other varieties, especially diuretic, hypoglycemic, and anticancer functions. In addition, it has antiseptic properties, it can alleviate both cold and flu symptoms, it strengthens the cells and tone the arteries, it lowers blood pressure, and it is also used in dermatology.

In addition to be eaten raw in salads, the Tropea onion can be prepared in several different ways: baked, boiled, as a filling for frittata (omelette). In Tropea, it is also used to produce a delicious onion marmalade, to be consumed on crostini, as an appetizer and as an accompaniment to roasts. Another delicacy made in Tropea is a marmalade of onion and roasted peppers, a perfect accompaniment for roasts.