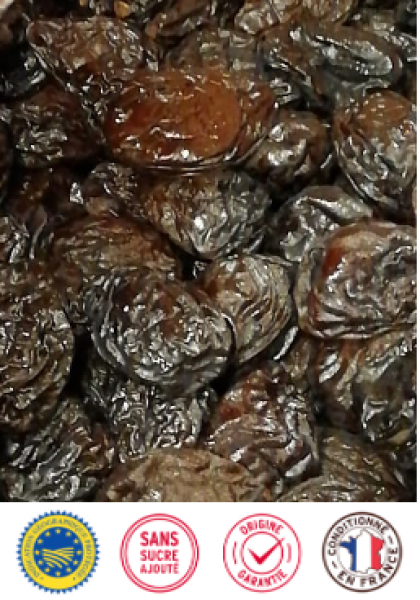 Top quality prunes made in Agen, France, on the edge of what used to be the old Gascony area of France. They are dark purple with a hint of blue in them, they are produced in the most traditional way, preserving their natural nutrients.

Soft and creamy are perfect for your most favorite recipes, to boost your breakfat or as ready to eat super healthy snack !

They are the dried version of plums called “Ente” plums grown in the Lot-et-Garonne region.

The harvest happens between the third week of August and the third week of September. It is done using machines. Collars are placed around the trunks of the trees, which the machines then shake so that the falling plums are caught by the collars. The plums are then washed and sorted. They used to be first dried in the sun, then in ovens.

Some people say the Ente plum was in France since the Romans; others say it was brought there from Syria by the returning crusaders.

The monks at Clairac Abbey were the first to grow it.

Commercial production of the plums into prunes started in the 1400s in the Quercy and Rouergue regions. Export of the prunes had begun by the 1600s.